The role of arts, culture and creativity in supporting a fair and regenerative agricultural transition 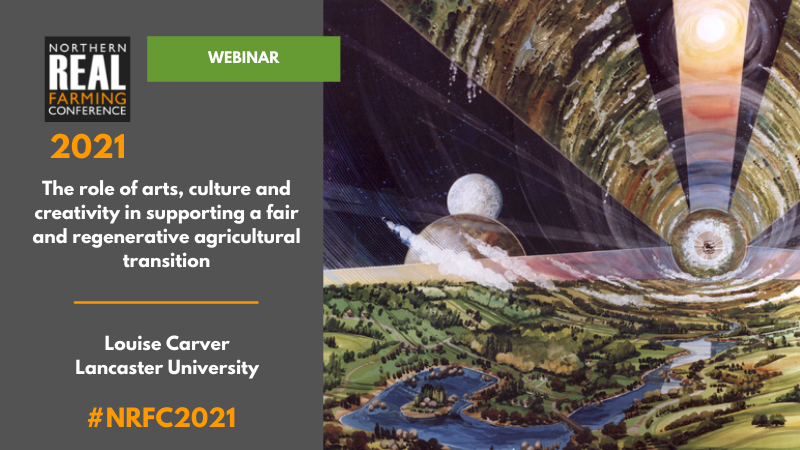 The role of arts, culture and creativity in supporting a fair and regenerative agricultural transition

Hosted by the University of Lancaster

It is expected that cultural changes will be both needed and experienced by those involved in the rural policy and agricultural transitions underway. This is perhaps as true for those in Westminster as it is for farmers and land managers all over the country. In this respect, it is sometimes said that we need a new vision for our relationship to land. But what does this mean and who’s vision counts? Who’s visions have we inherited from the past and what is needed for the future?
Arts and culture are often associated with urban contexts. But there is a growing movement which is concerned with the art of the rural— of environmental change, food, community and (agri)culture. This session will screen a film recently made in the Lake District National Park that brought together different voices and perspectives around the challenges and changes associated with the Agricultural Transition. Conversations during this session will explore how place-based arts and creativity can bring diverse people together into new collaborative settings, help us think about deep seated values and ask what role an art of the rural could or should play in making sense of the changes underway.
It will also introduce a new project called The Once and Future Land, that aims to bring together Lancaster University with organisations of the North West of England, artists, land managers, researchers and policy makers. During this discussion we hope to get feedback and register interest from attendees.

Louise Carver  – Louise is a researcher, curator, and writer. She develops creative and participatory forms of engagement working across geography, policy and the arts. She was recently a Parliamentary Office for Science and Technology Academic Fellow on ‘Sustainable Land Management’ in England. She is an Honorary Researcher at Lancaster Environment Centre.

Ewan Allinson  – Ewan is a sculptor, cultural landscape innovator, broadcaster, and Master Craftsman dry-stone waller. Ewan is the founder of the Northern Heartlands, a cultural and arts organisation working to give space to marginalised voices in farming, and an advisor to the Uplands Alliance. Ewan served as vice-chair of the award winning HLF Heart of Teesdale Landscape Partnership (HoT LP) from 2011-2016. He is currently undertaking PhD research at the University of Dundee’s College of Art, exploring the potential for art to help give voice to hill farmers and crofters embedded ways of knowing about land and nature.

Daniel Stanley – Daniel is the CEO of Future Narratives Lab and co-author with Shared Assets of the study “Power in Place: A New Narrative for Land”. Daniel is also strategic communications specialist, with a background in social psychology and community organising. He writes and lectures on narrative, values & framing.

Maddi Nicholson – Maddi is the Artist Founder Director of Art Gene in Barrow-in-Furness, along side Stuart Bastik. Her diverse practice involves working primarily with people and place – her interest is in communities: communities of people, of objects, of interest, of life – and the choices and allegiances that one makes. Her work is concerned with Art Gene’s role in bringing intelligent social and economic regeneration and reform to the Barrow-in-Furness area and beyond.