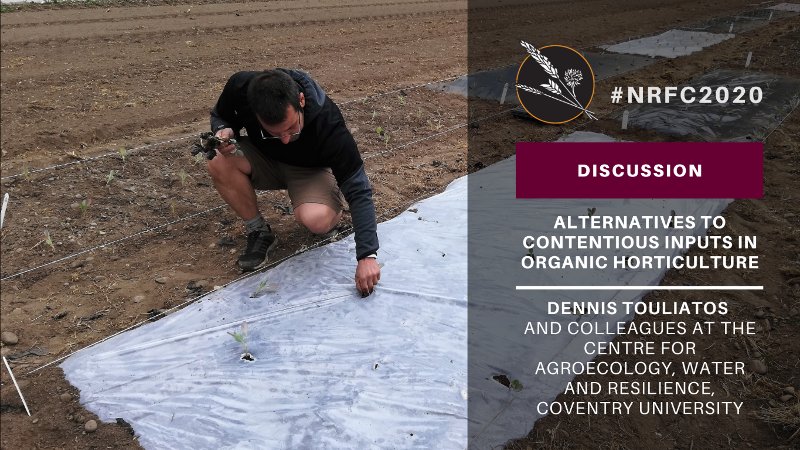 On Tuesday 6th October, researchers from Coventry University’sCentre for Agroecology, Water and Resilience led the NRFC session, “Alternatives to contentious inputs in organic horticulture“. As part of the EU H2020 project Organic-PLUS, they are investigating alternatives to materials that whilst permitted in organically certified systems have significant downsides.

The session focussed on soil-related contentious inputs, specifically: plastic mulch, peat growing media and animal manure from non-organic farms. Around 20 growers attended and brought with them a range of experience and opinions. After an introduction to the project, participants split into groups for more detailed discussion.

It was found that most people shared the project’s concerns but had other worries, in particular, the overall use of plastic in horticulture (not just mulch): plastic packaging (food and growing media sacks), fleece and netting, pots and modules. Many growers are already using alternative materials including cardboard and wood chip as mulch and plant derived fertility sources including comfrey – there was a strong appetite for more research around such alternatives. Although, there are always time limitations, the group were broadly in favour of ‘systems-solutions’, where alternative materials could be sourced on-farm rather than simply exchanging a contentious input for another brought-in product. Growers would also like more support and collaborative schemes to address these issues collectively. The team at Coventry found the session incredibly informative and helpful to their research; they hope to progress their work with this added insight and collaborate with some of the growers from the conference in the near future.

A summary of the group discussions:

Part 1, Use of contentious inputs and concerns about them: