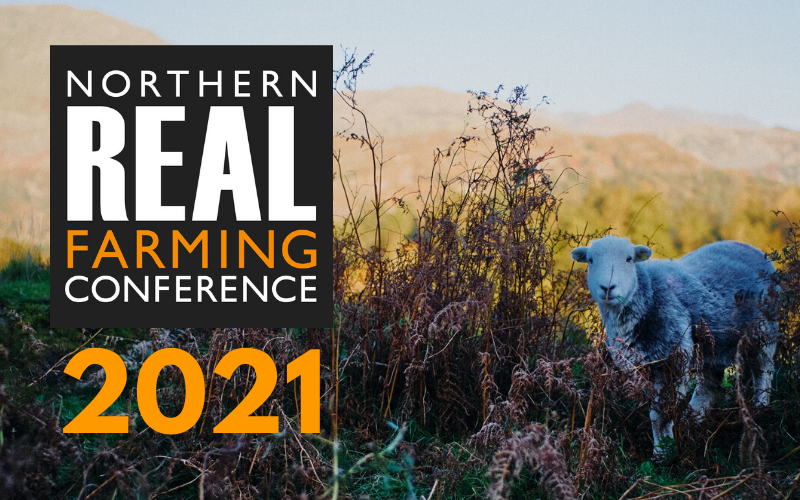 We are at a crucial point in developing the farming and food systems for the future. As the UK transitions to new post-Brexit frameworks for agriculture and seeks to emerge from the impact of Covid-19 stronger, the wider crises of biodiversity loss, ecological breakdown, inequality and social unrest continue.

The Northern Real Farming Conference is a space to dream, to re-think and to share practical experiences of regenerative and socially just ways to farm and bring food to markets and kitchen tables. We focus specifically on the North of England and Scotland and the unique landscapes and cultures of these regions.

This opening session will hear from a range of speakers, exploring northern farming and the vision for the future. There will be music from Deep Caberet.

Caroline Jackson – Caroline Jackson spent 35 years as an English teacher in the north west finishing her career as headteacher of a small rural secondary school. Since then she has, with a friend, set up the Claver Hill project, a 6 acre site on the edge of Lancaster dedicated to teaching anyone and everyone how to grow food and care for the land in sustainable ways.. She is a local Green Party councillor and currently Leader of Lancaster city council.

Pete Richie, Nourish Scotland – Pete is the Executive Director of Nourish Scotland, a charity focusing on food policy and practice. He also runs Whitmuir Organics with his partner.

Roz Corbett – Roz is a market gardener and beekeeper based in Glasgow in Scotland and works for the LWA on coordination of our work around COP26 and supporting a La Via Campesina delegation to COP.  She previously worked at Taybank Growers Cooperative in Perthshire and is also a founder member of the Scottish Farm Land Trust. Roz is also studying part-time for a PhD with Aberdeen University and the James Hutton Institute, looking at the community land ownership and new entrants in Scotland.

Michelle Parry – Founder and community builder at The ReWilding, based on a local dairy farm in Cockerham, Lancashire

Paul Cambre – Paul joined Growing Well near Kendal in 2020 in a new role to maximise sustainable income from our organic growing enterprise. Paul is from New Orleans and has worked and studied in the US,  Canada and China. He has a Masters in sustainable agriculture and was previously Head Grower for a local two Michelin-starred restaurant.

​Steve Lewis – Steve from Deep Caberet has been a vocalist, guitarist, percussionist, improviser, songwriter, community musician and bandleader for 30 + years. His ‘Deep Cabaret’ projects, from solo torch songs to African dance band to 15-piece improvised opera have in common a desire to explore the musics that most fascinate him. This most recent manifestation is the culmination of that work curating jazz, improv, African, folk and leftfield pop to set fragments of text taken from novels, journalism, spiritual and other texts that have important things to say about being human. 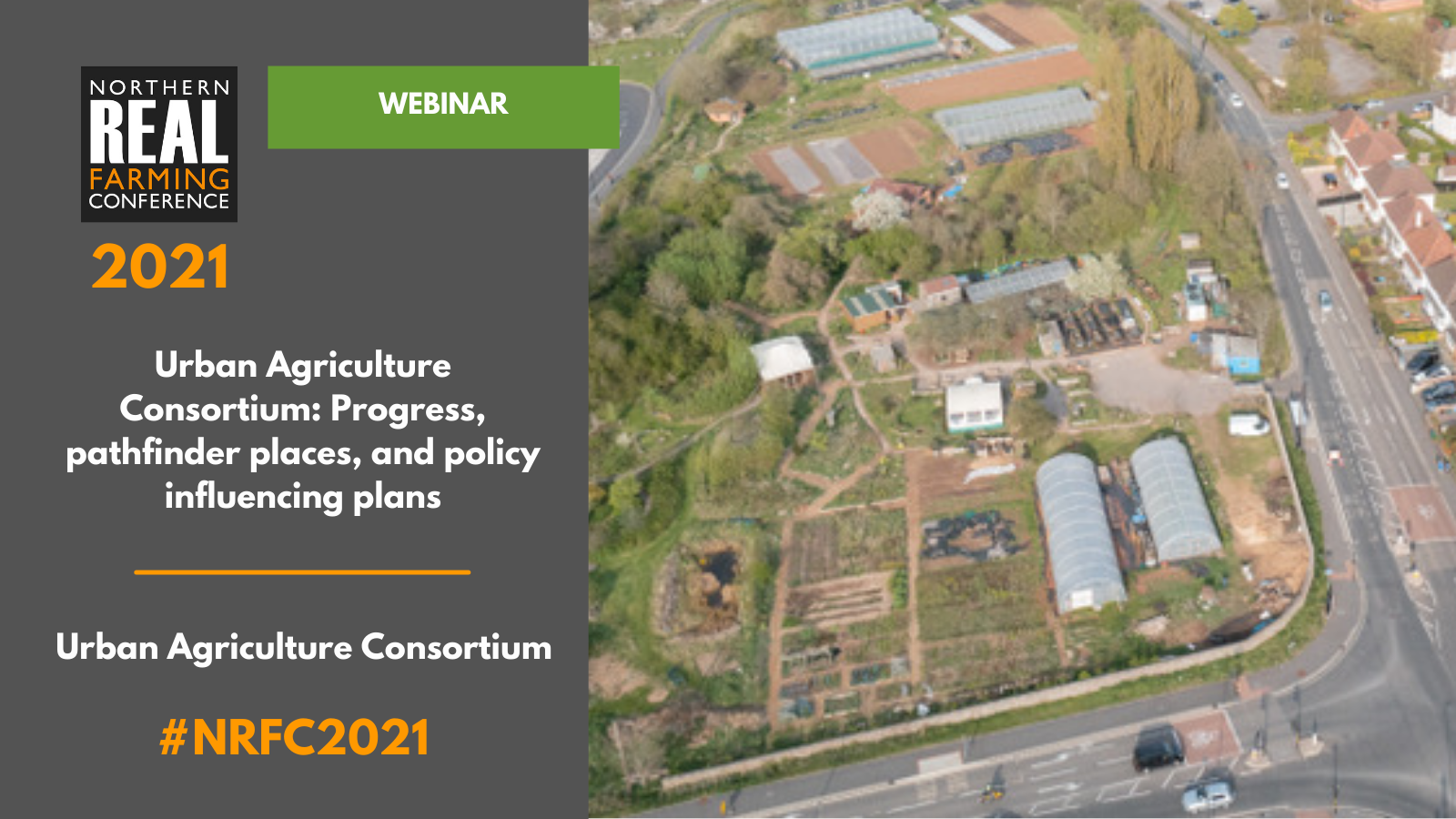 Hosted by the Urban Agriculture Consortium

The Urban Agriculture Consortium (launched summer 2020) has rapidly established itself as an innovative part of the emerging regenerative agroecology ecosystem, with an initial focus on 5 northern “pathfinder” cities, as well as emerging partnerships & collaborations across the UK.

We’ll report back on progress with a particular focus on:

We hope this will inspire further pathfinder clusters in other parts of England and Wales in 2022.

People will gain an insight into the rapidly establishing Urban Agriculture Consortium, growing momentum behind urban farmstarts and collaborations between local, regional and national partners on how to influence policy makers.

Jeremy Isles – Jeremy instigated the Urban Agriculture Consortium in response to concerns over rising food insecurity and climate emergency. After extensive consultations during 2017-19, the UAC was launched in summer of 2020.  Arriving in the midst of Covid & Brexit fall-out, the UAC message of re-localisation of regenerative agroecology has struck a chord and the UAC has rapidly established a place in the evolving ecosystem of partners advocating radical & bold food system change.

This work is built on Jeremy’s long-standing work as pioneering environmental activist, “doing something useful” as a cycle campaigner at Friends of the Earth in 1983, as Director of the London Wildlife Trust (1984-90), in Bangladesh and Eritrea with VSO (1991-93),  as Regional Manager for Sustrans (1994-2000), and as CEO at the Federation of City Farms and Community Gardens (2000-2016).  Many of the projects and partnerships he initiated and worked on during this period have had a significant and long lasting impact including the National Cycle Network, Allotments Regeneration Initiative, Local Food Consortium, Community Land Advisory Service, and Growing Together.

This long track record has led to his involvement in an innovative oral history of the green movement – funding yet to be confirmed.

Other interests include nurturing an allotment, singing, guitars, cycling, painting and sailing.

Maddy Longhurst – Maddy has always followed her instincts to work on initiatives and ideas that lie in the fertile margins and serve future generations. Recently this has involved the protection of land and soils, community-led thermal imaging of cold homes, Ecosystem Restoration Design, creating regenerative Tiny House Settlements, Sociocracy and Gleaning training for communities. Maddy worked on Phase 1 of the urban agriculture project in 2019 and is currently coordinating the Urban Agriculture Consortium with Jeremy Iles.

Alison Teal – Alison trained as a Clinical Psychologist in Australia and worked as a Consultant Psychologist and Family Therapist for many years. She returned to the UK in 2013 and settled in Sheffield in February 2014 in Nether Edge & Sharrow. With her daughters close to adulthood she decided it was time to get involved in politics and lobby all levels of government to take action on the Climate and Ecological Crisis. She is passionate about nature, social justice, women’s equality, and democracy.
Alison says, “The Green Party is the only party which looks at the challenges we face locally, nationally and globally in a systemic way. We consider how the decisions we make today will affect future generations.”

Alison became a founding core member of Save Nether Edge Trees campaign group in 2015 which led to several years of engaging in non-violent direct action to prevent the felling of healthy mature trees. She was arrested for trying to protect trees and also taken to the High Court by Sheffield City Council who applied for an order to send her to prison. However, the judge dismissed the case.

Duncan Williamson – Duncan is a recognised environment, sustainable consumption and food systems expert. He is the founder and director of Nourishing Food Systems and currently works with Action Against Hunger developing their strategies on climate change and the emerging food crisis. He is working with WWF, Chatham House and is on the steering group for the Fork to Farm COP26 project, overseen by Nourish Scotland. He has been working in the environment and related fields for over 20 years, with the last 13 focused on food systems and has an MSC in Sustainable Environmental Management focusing on land use. He has led teams and projects at Compassion in World Farming (CIWF) and WWF UK. He is on the advisory body for the DiverIMPACTS project, which focuses on crop diversification through crop rotation and the food systems atlas. Also, setting up a community farm in his village.

Gareth Roberts – Gareth is a founder member and co-director of Regather, and coordinator of ShefFood – Sheffield’s Food Partnership. Gareth is passionate about cooperation, and has worked collaboratively with people from all walks of life for over 20 years. Since 2015 Gareth has led strategic developments around Community Economic Development and Sustainable Food Systems in Sheffield, ensuring Regather and ShefFood lead on innovative economic and social change. His mission is a food system where money is retained in the local economy, land is more productive, food is better quality, health is improved and people have better awareness of and involvement with how the food system, from local to global, can be changed for the better.

This event explored the challenges and opportunities of developing sustainable food production and distribution systems and networks in our northern cities. We heard from four cities in the process of developing urban farming in partnership with the Urban Agriculture Consortium, and from Dr Jill Edmondson from the Institute for Sustainable Food at the University of Sheffield.

This virtual workshop used case studies and presentations to:

The following speakers had input:

Key themes emerging from the discussions and presentations included:

Find links and resources mentioned in the event chat: https://docs.google.com/document/d/1G5gId8vl2bz42qEMdmPfIYKuQZS9Lk3xN8tnWHfLjVs/edit